Toads
Words that come to mind about this piece are strange, edgy, and fun. In just over a minute the music moves seamlessly through four different styles. I think of it as invoking images of mutant creatures wreaking havoc on a small town in a 1950's monster movie. Recorded by Amy Leonard, violin; Jason Shapiro, tenor saxophone; E. Shawn Qaissaunee, guitar; Peter McCarthy, bass; and Skip Rohrich, drums. Note: The recording is a tune demo, not a full-length performance.

Toads is meant to be OUT. The first section has a minor blues feeling even though it does not have a blues harmonic structure. The solo fills (on E+7 and Db7) are fairly short on the demo recording. They can be played longer and have more of an avant-garde spirit. The second section has an angular melody line, with an emphasis on major 7th intervals, and shifting time. It can start softly and build in volume to the third section. The third section is also angular; however, there is a melodic shift from major 7th intervals to fourths & tri-tones and the rhythm section is in a more straight-ahead style. Finally, the fourth section (last 4 measures) has a funk feeling.

I envision Toads as being an open piece where different things can happen each time it is performed. In particular, solos can break up the tune structure in creative ways instead of following the 35-bar form as written. 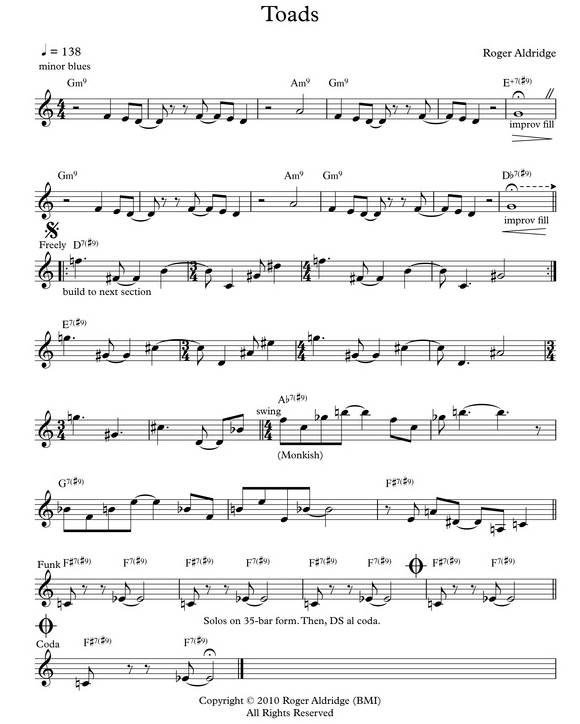